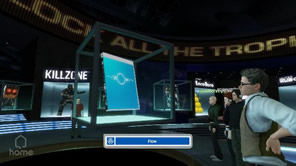 I’ve been waiting a long time to post something positive about Sony and they’ve finally done it. They were finally able to shine at GDC, showing off Little Big Planet and PlayStation Home. The former is a great little platformer that looks like a cross between a Pixar cartoon and stop-motion animation. However the really interesting revelation (notwithstanding Kotaku breaking the news early) was the pervasive online world of PlayStation Home. Visually it is simply stunning, and allows players to converse and interact in Second Life style. Whether this is a good fit for a gaming platform remains to be seen, of course, but if the community does take to it, it will provide a fantastic hub through which to access other services. The customisable “home” to which you can invite others is a nice touch, with a Hall of Fame/Awards system that seems to offer Xbox Achievement-style trophies from games. The real question is quite how to handle hundreds of thousands of users in the central areas. Presumably they will have to be divided up, but then how will you locate your friends for online gaming? It’s cool and it’s free but the downside is that it’s not a very game-centric advancement. However if a satisfactory solution can be found to these issues, innovative ideas like this, while not truly groundbreaking, show the future may not be quite so grim for Sony. 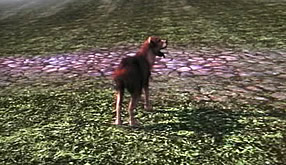 Meanwhile Peter Molyneux, though claiming to be more reserved, is still waxing lyrical about Fable 2, the sequel to Lionhead’s pleasant if shallow RPG. Aside from including the ability to have children and raise a family (meaning that if you elect to play a female character you can get pregnant — he believes the player character going into labour will be a first), the big feature they revealed was the removal of the entire HUD interface. This itself is not unique, but what they have replaced it with is. Because it’s a dog. Yes, canis lupus familiaris. Pets are far from new but this one you do not directly control. The idea is to foster a two-way relationship so that you genuinely care about this mutt. IGN has more details on the mechanics, as well as videos. Between raising kids and adventuring with your dog, the notion of unconditional love seems to be a theme here with a genuine desire to tap into the player’s emotions. However the world’s rough visuals show the game is far from ready, so don’t expect this to replace Nintendogs