Someone raised an interesting question on the hub yesterday, querying one of life’s oft overlooked little mysteries: exactly what network is Jack Bauer on? The man is attached to his phone, using it wontonly at peak time with virtually no thought for the expense, despite the fact he has precious little discernable income (we are, of course, referring to Day 5). 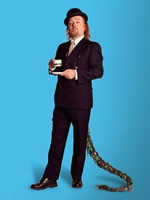 I’ve only recently started watching a sizable amount of stand-up comedy as I’m particularly demanding about the sort of humour that will keep me consistently entertained in a non-narrative form. Having recently watched Black Books in its entirety, I thought I’d give Bill Bailey’s Part Troll a go. The man is phenomenal. Not only is he continually hilarious, generally an agreeable trait in a comedian, but he’s ridiculously talented too. The stage is littered with instruments, not merely for decoration, but because he can actually play them all. The musical numbers provide highlights throughout the show but the material more than holds its own in between, albeit in a somewhat bewildered abstract fashion. Helpfully he actively attempts to avoid anything that resembles a direct joke, “Three blokes go into a pub. One of them gets a bit stupid, and the whole thing unfolds with a tedious inevitability.” I know comedy is a very personal thing, but at least give Bill a go if you get the chance, if only for his emotionally charged ballad as an attack on modern American rock. The duck, ladies and gentlemen, lies shredded in a pancake, soaking in the hoi sin of your lies. 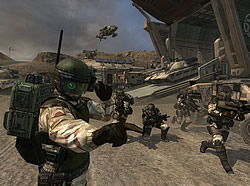 I’m always cynical about screenshots released well in advance of a game since they often bear nothing more than a passing resemblance to the final product once it has been suitably downgraded to actually run on machines which don’t require quadruple-core processors and a liquid nitrogen coolant system. Whilst Quake 4’s specs aren’t far off that, at least we already know what the tried and tested engine is capable of. Now enter Splash Damage, a London-based developer who made a name for themselves with the Enemy Territory multiplayer mod for Return to Castle Wolfenstein. Continuing their relationship with id, they’ve moved the location to the world of Quake in Enemy Territory: Quake Wars. It’s not unknown for me to drool over screenshots in certain instances and this may have been one such occassion. There’s nothing like an alien invasion of Earth to get your trigger finger itching, and this looks to be the best one since the Covies attacked in Halo 2.

Later today, 9am PST (that’s 5pm GMT for those who can’t count and, in case you were wondering, 7pm in Istanbul), Gamespot are releasing a demo for a new RTS Star Wars: Empire at War which lets you relive the attack on Hoth in your very own bedroom. Well, depending on where your computer is I suppose, or the length of your mouse cord. Enjoy, be it upstairs or downstairs.