You may know that I dumped Norton Antivirus a few months ago as I was fairly vocal in my rapture that my computer was finally free of its vile shackles. In many ways its protection could be considered absolute — it took so bloody long to perform the simplest tasks that I couldn’t possibly do anything that would actually infect my machine with a virus! The immediate performance boost running sans Norton AV is striking, and as a temporary measure I decided to switch to the free AVG. I had heard good things about the product and was curious as to how the competition managed to charge exorbitant prices for system crippling software when sprightly free alternatives were so widely available. I discovered that the limitation of free antivirus applications lies not their detection of viruses, but in their poor removal ability. And so it was time to start paying for protection once more. 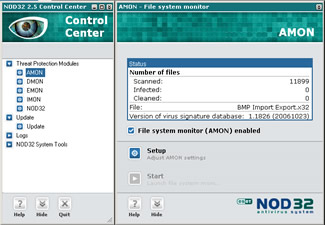 After much research I found NOD32 to be the most praised by the tech crowd, offering strong protection with minimal system drain. One independent test claims it has not missed a single “in the wild” virus for seven years. So why am I not wholeheartedly recommending to everyone and their dog? In short, the interface. ESET are not aiming for the lowest common denominator. While nowhere near as complicated as I had come to expect from others’ comments, the style is such that those who prefer to just install and leave may have trouble.

It is designed in a modular fashion and you’ll need to know what each module does, e.g. IMON for internet, EMON for email, AMON for active monitoring, etc. Once you know this, the control interface is reasonably intuitive, although setting each one up individually can be a bit unwieldy at first. The benefit is that you only need to run the modules your system actually requires (which in my case was all of them). It is certainly easy enough for anyone reasonably computer literate to use, and it runs so smoothly that you’ll often forget it’s there at all. Strangely at some point we seem to have forgot that this ought to be a prerequisite for system utilities running in the background.