No News Is Tiger 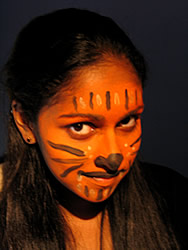 Since I’ve been dealing with a largely empty house, very little of note has been happening here. Concordantly, in lieu of actual news, I have decided you will have to make do with a photo of my sister Romina with her face painted like a tiger instead. Imagine, if you will, that it is suitably profound.

Luke has uploaded a large selection of photos from The Master of the Thing. 161 of them, to be precise, although he has taken many more. I was hesitant to provide the address since the day he uploaded them his domain providers “forgot what DNS is” in Luke’s words. Fortunately he has provided an alternative address so a plethora of visual delights are available on command as intended.

Jet Photographic have also (finally) got their photos from Downing Ball online. Peruse them at your leisure. There’s a particular good one of Kirsten amongst the informals, of which the photographer was very proud. Some of my own will be available in the Gallery shortly.

As of the beginning of March, Sparkie’s Junkyard has featured a regularly updated blog, and has recently been colourfully prettified from it’s earlier Soviet-inspired palette of greys*. So if you know Sparkie, make sure you’re not missing out.

* Many people do not realise that Russia, much like the 1920’s, only exists in black and white.