I found your photo of the Indian dancer on the Morgue site and used it as inspiration for an art quilt. I made her in fabric–mostly cotton batiks, with some gold lame and Swavarosky crystals for the jewelry. Her eyes came out especially nice, so I named it “Naina” which I think means “eyes” in Sanskrit. The quilt was accepted into A World of Beauty, the International Quilt Show in Houston, Texas this Nov 1-5. Over 55,000 people usually attend this show. I attached a copy of the quilt, but it looks much better in person than in the photo. Your photo was lovely. Thank you. 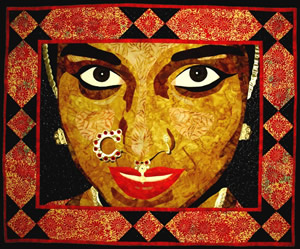 I love seeing my photography used by others in ways I would never have imagined but my most popular photograph has gone off in a truly bizarre new direction. Vickie emailed to let me know that she has turned it into a quilt. I’m sure you’ll agree the results are quite stunning, particularly the eyes as she points out. Of course if you happen to be in Texas around then and quilts are your thing then you can even see the real one. As for the show itself, you can take a look at the 2004 event for an insight into the fuller quilt experience.

Meanwhile my father suggests that, once my inevitable millions start rolling in, he has found the perfect brand of mobile phone for me. If you thought the epileptic Motorola “party phone” was gaudy, take a look at GoldVish “luxury communications”.

You may find it somewhat ironic that the Globalist Foundation has hit some legal issues regarding its name and I am now involved in the rebranding as Global21 (the numerical device denoting our current century). It will be a fairly seamless transition as the individual chapters will retain their current names as “The ______ Globalist”. For those in Cambridge, the new coffee-themed issue is due out on the 16th October. As I was in Germany I did not have a hand in this issue, but I’m sure it’s still worth reading.

And finally, despite the derisive laughter with which I responded to YouTube’s arrogant “we won’t be selling for anything less than two billion dollars” attitude, you have probably heard that Google have actually gone and purchased them for a similarly ungodly amount of money. Luke will no doubt have something to say about the company’s complete lack of a coherent business plan, particularly when it involves buying a company that was described as “haemoraging money” at an alarming rate. As far as I can tell the purchase was either a Microsoft style childish tantrum at the comparative failure of Google Video to outdo its rival or another step in a sinister continuing attempt to own all the data in the world.