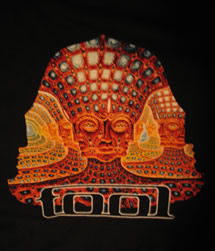 On the tube I chatted with an amiable chap named Mike from somewhere around Stoke (it was suitably northern, anyway) who remained cheerfully buoyed by the gig despite the fact he had to spend the night on a station platform until catching a train the following morning. We had both been worried that the audience looked rather young, as though they may all have just discovered Tool with the new album. Fortunately our fears were unjustified as they sang along with virtually everything, albeit seeming not to recognise Sober. It’s now very difficult to deduce who will have heard of the band and who will not. Four years ago it was easy, no one had unless you knew they listened to them. Now the band are rapidly reaching a more mainstream status, at least within alternative music circles.

The setlist had been greatly altered from the previous night which I think is a good thing. Opening with Rosetta Stoned (indeed playing it at all, one might argue) was an odd choice, and I think our Stinkfist start worked better. The Pot was a welcome addition, aside from a brief screw-up at the beginning, and a nice surprise as I had not been expecting it live. Of the new material what really impressed me was Jambi, which live is filled with a charged energy that is truly electric. Right In Two was an etherial experience that highlights just how exceptional Tool’s live show can be. The visuals, the lighting and the music combined to form something truly otherworldly, particularly with the enchanting rhythm of Danny’s drumming — if you take one thing away from seeing them it’s that he is a monster of a man with arms as muscular as most people’s legs! Maynard, meanwhile, sported shades and a new spiked Mohawk, sometimes crushing it with a cowboy hat that, sadly, was not thrown out to the crowd.

Maynard suggested the band would be returning to our shores as early as November, adding credence to the idea this was still something of a warm-up tour. I would love to hear Wings live, but to arrange that 18 minute epic into something that works (how exactly does one appropriately sing about their own mother’s death?) is a serious task and I wonder if perhaps that is what they are working on. The end result could genuinely rival their Salival live version of Pushit.

Returning home it seemed as though a quarter of the people travelling that evening had attended the Tool gig. Not only near venue but later while waiting 40 minutes for a train to Cambridge I ended up chatting to a few fans and later still when being transferred to a coach due to a diversion I bumped into another couple who were heading back from the gig. Bear in mind we were in Stevenage by this time. Fortunately one coach went directly to Cambridge so I was able to avoid the bus from hell, stopping at every little village between Stevenage and Cambridge. It all would have been okay if I did not have to be up before 7am to get back into London again for a training day with Bird & Bird…