Musings for a New Year 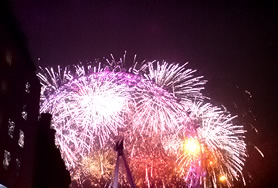 I saw in the new year with a few friends amid the crowds on the South Bank watching fireworks launched over the river. From below the colourfully lit London Eye it was a fairly spectacular experience, even for one spoiled by Cambridge fireworks displays. Sadly with virtually every bridge closed until 1am, getting food became a problematic endeavour, one which we ultimately abandoned. With my expectations for new year shindigs generally deflated by a few underwhelming experiences, this was a surprisingly fun night and great opportunity to catch up with some old friends.

2008 brought two major changes. One was the end of student life and the start of my working career. The other was the end of a three year relationship. Work could not be going better — both the firm and the IP department suit me incredibly well in both quality of work and especially the general atmosphere. It may be early to say, but I certainly hope to remain here as I cannot see another firm better suiting me. And I’m not the only one. The only slight hiccup was the departure of my supervisor, having taking a few months to build up a rapport, meaning I have now moved to a new office. It is not without advantage, giving me a new perspective on the department from a different floor and getting to know new people, as well as giving me access to different types of work (trade mark as opposed to the more “hardcore” patent litigation!). I will be sad to move on to my next seat in a few months.

It was during my trip to the States over summer that, given some distance, both Kirsten and I realised our relationship had run its course. We were fortunate in reaching this realisation at the same time, resulting in a perhaps eerily amicable break up, which sees us remain friends. As ever I will not air personal details here, nor will I discuss what she has been up to since. Suffice to say after three years together it is inevitable that there will be some residual emotional fallout but I can look back fondly on the time we spent together as positive and enhancing rather than wasted.

So the two big shifts of the last year were fundamentally positive leaving me with a stable but fairly empty slate upon which to carve out 2009. I am happy and I am free (in both the general sense and more specifically single, allowing me to take advantage of any opportunities that present themselves without first considering someone else), which are about as good a set of circumstances as a new year could possibly offer. Broadly at least, I can see the direction my life is taking and I like it. I am not generally one for mandated resolutions, but were I to have one it would probably be this: don’t start compromising now. I have not so far, and I see no reason to begin in 2009.