Yes, despite it being a Thursday, tomorrow I shall be taking a (shock, horror) train. At this time P-2004 feel it wise to issue the following advisory warning. To ensure your continued safety we have designed the following T-shirt and would strongly recommend that none of our readers attempt to use the public transportation system unless sporting one. The front was carefully designed to calm police officers in the vacinity and ensure that you are not accidentally mistaken for a terrorist based on current racial profiling. It has the added advantage of speeding your journey by allowing you to avoid stop-and-search delays, unless of course you already look like a “little old white lady”. Upon realising the small possibility that it could be considered inflamatory by other groups, the back was hastily scrawled to prevent lynching. Please contact us for pricing. 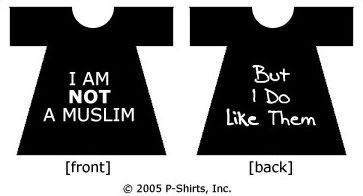 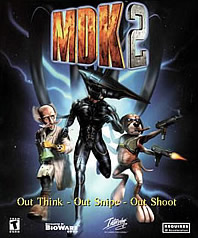 The payoff certainly outweighs the risk, it being to visit TomTom for several hours of good new-fashioned Xbox Live Halo 2 multiplayer madness. This will be my first forray into the high octane world of Xbox Live, but there’s a good chance that after tomorrow I’ll be cracking open my free trial membership too since our broadband has been upgraded to the requisite 1Mbps in my absence. So look out for PhoenixMDK on the scoreboards in the near future!

People frequently enquire about the trailing three letters in my first person shooter handle so I’ll explain. It stands for “Murder Death Kill” in homage to an impressive little twosome of games from several years ago, developed by Shiny and Bioware respectively. The naming of the game itself was shrouded in mystery, some stating that it was intended to be a nod to Demolition Man but marketing a game with that name would be too difficult. With the sequel it was suggested the name came from the protagonists, Max (the four-armed trigger-happy dog), Doc (the obligatory mad scientist) and Kurt (the signature character with a sniping helmet). When quizzed the developers would all throw around various quirky possibilities such as “Mothers Day Kisses”, while the official manual interpretation was, “whatever you want”.