Apologies for the delay in updating, and a belated gong xi fa cai to you all. It all started a few days ago when my MP3 player started misbehaving. I wiped it, reinstalled the firmware and it’s been shiny and responsive ever since. Unfortunately soon after, it clearly being a technologically inauspicious time, my laptop pulled the same trick. Fortunately a set of backups and 2 full formats later (after a comment from Ravi reminded me that quick erasing leaves various residual system files behind), everything’s looking fine once more with a pretty new Vista-inspired appearance.

It seems to have been a particularly inopportune week from a health perspective too. Theresia’s eye affliction worsened to the point that she’s been forced to return to Germany, degrading this year to return once she’s recovered. Meanwhile Ackers has broken his ankle in an overzealous football game and I’ve heard that Sarah L managed to split open her head in an over-exuberant pub crawl. A collective get-well-soon to you all. 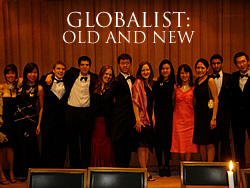 The last few days have been pretty active Globalist-wise. The swanky new issue was released yesterday, so you should be able to find a copy in a nearby faculty. The AGM was held on Sunday with the election of the new editorial board. Although it’s hard to give away such a personal project, they’re a keen bunch and having worked with Dexter already, he has my utmost faith. I have agreed to continue helping on the production side in an auxiliary capacity. To round off the handover was the Annual Dinner yesterday evening. Vanessa truly outdid herself in arranging the event which tasted fantastic and pleased the remaining four senses admirably.

Kirsten got me to see Sophie Scholl along with her friend Fran on Friday, although its alliterative propriety evaded me at the time. For those who don’t recognise the name, Sophie Scholl was a member of The White Rose, an Anti-Nazi German student resistence group who operated during the war, and was executed for actions.

P.S. A cookie for anyone who spots the small, recent change to the site design. Speaking of cookies, I just opened my last pack of Oreos from the States. If I’m looking a little shaky in a week, chances are I’ve finished them and am suffering from the resultant withdrawal symptoms. Please be sensitive.