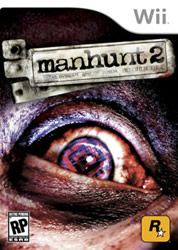 The BBFC refused classification for Manhunt 2 (making it illegal to sell in the UK), a questionable honour it shares with only 1997’s Carmageddon for its ability to kill other drivers and run over pedestrians. I am both a gamer and anti-censorship, yet I find myself strangely defending the BBFC against outraged gaming fans. This was by no means an easy decision and given the 10 year period in which they have rated everything they were faced with, it seems difficult to argue this will be a slippery slope leading to greater censorship. Manhunt, for those unaware of the franchise, is a creation of the ever-controversial Rockstar, best known for creating the Grand Theft Auto series and, well, getting into trouble. Though many are shocked by the result, I actually called this one as soon as the title was announced for the Wii. With its unique controller the player actual enacts the killing and the immediacy this offers was always going to be cause for concern.

I think people need to be aware it is not the gore to which the BBFC object. This is being developed for the Wii and the older PS2 so lacks the visual realism of a PS3 or Xbox 360 title. Rather it is the “casual sadism” and brutality of the style of killing. Now I accept this in films like Saw, a well-written complex thriller which was highly intelligent and very compelling. I accept it far less in bad films which aims to titilate through violence and gore, rather than tell a story or serve some greater purpose. The original game featured a character who had been kidnapped and awakes with a disembodied voice speaking to him through an earpiece telling him he must kill his way to freedom, as those in the vicinity have all been paid to kill him. The voyeuristic villain watches through cameras, offering advice in return for brutal killings. The result undoubtedly violent, but tense and visceral with decent stealth gameplay. This time it sounds as though the player’s character may be more free in how he acts, making it far more dubious.

Of course, should the decision be overturned, the massive publicity received could not be better for Rockstar. I certainly would not have bothered mentioning it otherwise. Now I remain strongly of the view that adults ought to be free to do and see what they please insofar as it causes no harm to others. Yet I do object to those who argue the BBFC has gone completely off the rails here. The result seems to be that the BBFC are saying violence is okay in videogames so long as it is a means to an end and not an end in itself. While I take censorship of anything very seriously, I’m not sure I disagree with that sentiment.