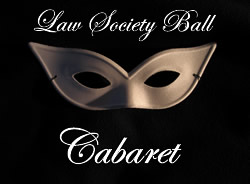 Last night was the Cambridge University Law Society‘s Annual Ball, one of the highlights of the calendar because of the frankly ridiculous sponsorship it attracts. This year’s theme was “Cabaret” and it was being organised by last year’s Downing Ball president, Charlotte F. In fact this was one of the nights when Downing’s dominance becomes painfully obvious with Nick doing the rounds as CULS President and Carlo as one the first year reps. In an unforgivable move for a lawyer, I discovered that I’d somehow neglected to bring any bow ties with me this term. Fortunately TomTom ably stepped into the breach offering me not just a tie but a choice of colours. We actually arrived at Chilford Hall very early due to Kirstin’s (you’re going to have to start distinguishing between CompSci Kirsten and lawyer Kirstin, I’m afraid) overly enthusiastic taxi timings. The ride up was certainly much more comfortable than queuing in the cold for an overpacked draughty bus like last year. A champagne reception awaited us followed by the prerequisite three course meal (with complimentary masks) and then several hours of dancing with a swing band and the inevitable declined into cheese. The food was decent but not particularly noteworthy it must be said, aside from the profiteroles and the wine (which was good for Merlot). 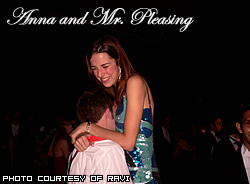 With tales of last year’s excesses spreading swiftly, this year we were inundated with a large contingent of non-lawyers who all seemed to enjoy themselves thoroughly. Lucy and Liza came along, as well as an impressive number of NatScis, Ravi nabbing a spare ticket at the third years’ table. The Globalist contingent of lawyers was also out in force. Late in the evening I swapped numbers with a rather wasted Dawson whom I assume accompanied the Pembroke lawyers and seemed to have been making good use of the ample amounts of freely flowing booze (albeit in slightly less debaucherous quantities than last year). On the downside there was a distinct lack of a vodka luge or chocolate fountain (although that’s arguably a good thing since it meant no chocolate to clean out of my suit this morning…) but there was a full cold breakfast of Nadia’s-supplied pastries at around midnight which kept everyone full and content. The addition of two scantily clad dancing girls to accompany the jazz band during the reception was a good “themed” move. I’m considering hiring a some for my room. You know, for special occassions.

Even Ravi was eventually forced to concede at about 2am, “I have to admit you lawyers do know how to have fun.” That we do. 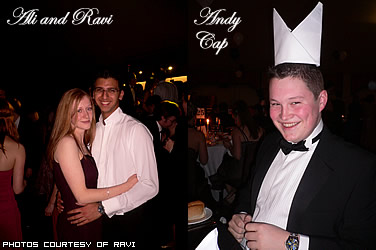