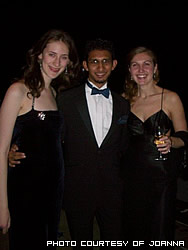 The annual Law Ball is infamous for its City-subsidised extravagant excess and, having been every year at Cambridge, last night’s may be the last I get to attend. The event has been held at the same location for years so attendees were curious about the decision to move it, and scepticism increased proportionally with the ticket price. The new venue was the Newmarket Race Course and people’s concerns were instantly quashed. The spacious interiors and balconies alone were worth the expense as one could now properly wander between areas rather than feeling somewhat stifled by the sheer number of people that the event inevitably attracts. The added advantage was that it allowed for multiple varieties of music at once.

The first floor featured primarily jazz with Fitz Swing kicking off the reception as the champagne flowed liberally. The second floor only opened up after dinner, featuring another dance room with a dedicated DJ and bar. Corporate sponsorship was more obvious than normal, but it was easily forgiveable given the style and range of offerings. The chocolate fountain, casino and vodka luge formed the unremarkable staples of any Ball. However the bar carved out of ice and the casino’s Martini waiter service were very slick touches, although the drinks themselves were questionable. Carlo had promised that alcohol would last the entire evening and though we scoffed at the time, the several bars had a huge tab in place with drinks available throughout the night.

Dinner itself is often something of an anticlimax after the lavishly decorated reception and I expected little of the “Supreme of Chicken and Tagliatelle”. I could not have been more wrong — the tender breast of chicken was divine, while the pasta proved a delightful aside. Desert, conversely, never fails to impress and tonight’s Belgian white chocolate ice cream proved no exception, served in a tuile basket with chocolate fondant pudding.

It was a fantastic night, arriving back in Downing at 3:30am and struggling for about 10 minutes to wake up Martin the porter since Kirsten had stolen my keys. Congratulations to everyone involved, you truly outdid yourselves. And if anyone wishes to invite me back next year, I should be more than happy to oblige.

Betting on a Better Bond

A Dire Shortage of Virgin’s Blood