Apologies for another unplanned extended absence while I relocated to Cambridge for my final term here and tried to kickstart work for the last slog before finals. While Kirsten’s posts seem to increase in frequency as a procrastination attempt the closer exams come, I imagine my own posts will be sporadic this term. However I do understand that this site is seen as a bastion of procrastinatory reading by many so I will endeavour to maintain at least semi-regular service despite exam term. Remember that even when absent I am still scouring my numerous RSS feeds for interesting news items that don’t make it to full-fledged site entries and sharing them (or as a feed’s feed if you prefer). The bottom line: if you want something to read then don’t hide away working and do something interesting. 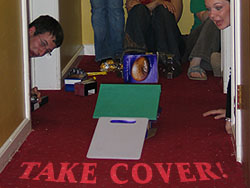 Like, say, Keggfest. Now an annual institution, Keggfest harks back to the first year when I established the celebration of chocolate as a protest against the commercialisation of the religious Easter holiday. The rules are simple: each attendee must bring a Kegg, a chocolate egg bought at sale-price after Easter, though this year several people really raised the bar with full-on cakes and chewy rice krispy nests. Were there to be an overarching theme, however, this year’s would undoubtedly have been the innovative destruction of eggs with creative methods including crashing remote cars into them at high speed and launching them down corridors with an oversized catapult. The results were as tasty as they were messy. 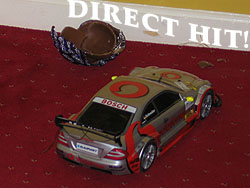 My laptop had been stuttering at the start of term and realising that I would have little time to deal with it later if things were to deteriorate, I opted for a pre-emptive reformat. I cannot stress how much easier the rebuilding procedure was with my new pre-partitioned hard drive so that after formatting and rebuilding the system partition, my data was already sitting there ready for me to use without any of the usual convoluted backing up and copying. After that experience partitioning off my data is likely to be the first thing I do with any new machine.

Does the name Project Offset mean anything to you? If so, you’ll definitely want to click on this link to the big reveal. Since footage first emerged in 2005, this stunning looking fantasy game has promised cinematic quality rendering in an FPS epic fantasy environment. In short it promises to be everything that Dark Messiah

was not. The catch is that now they’re only releasing information after enough people have visited the site, with a blue progress bar edging forward in tantalisingly small steps. Good news is that already people have unlocked two gorgeous screenshots. Bad news is that repeated refreshing from the same address won’t help.