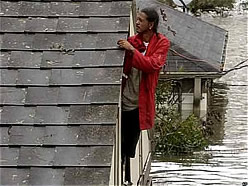 The first reliable post-hurricane reports from my family in Louisiana have started to arrive. Those affected in the south of the state, although okay themselves, say the damage is pretty awful. Stephen only had time to send a few words since he’s helping at the Red Cross shelter. He did say that, “New Orleans, St. Bernard, Plaquemine, Gulfport, St. Tammany, Biloxi, and Pass Christian are destroyed or flooded”, although fortunately Baton Rouge escaped the worst of it. Jenna let me know that she’s okay and they still “have power, but the rest of the Traylor clan is without”. Jessie and Cassie have moved in with them for the moment, and schools and universities are shut for at least a week. She’s promised pictures later. Between this and the tsunami it would appear that the last year has been a particularly bad time to be related to me if one wishes to avoid natural disasters.

Predictably the communications infrastructure was knocked out with mobile phone cells reaching maximum capacity and generally worsened by the fact that power was knocked out in several areas (and remains so in some). However, amateur radio volunteers (HAM radio as it’s commonly known) have proved key in the recovery effort by transmitting signals around to alert emergency services about trapped survivors while the telephone services flounder either overloaded or offline.

A study written well before estimated that it may take up to nine weeks to pump the water out of the submerged New Orleans which lies below sea level. Whilst it’s no active volcano, perhaps these events will make us reconsider accepting the risks of choosing to live in such locations (don’t get me wrong, I think it would be horrible to see an incredible, uniquely vibrant city like New Orleans abandoned). I can only hope that the city I’ve often described as “the only part of The States with real culture” is protected by some voodoo charms that’ll keep the damage under control because some of those French Quarter buildings are truly irreplacable.