First off, thanks to everyone who sent birthday messages of various descriptions, they were all much appreciated. That’s the end of my birthday entry; yes that’s it. Moving on.

I’m a big fan of the posibilities presented by alternate reality gaming and have previously raved about the I Love Bees campaign that preceeded the launch of Halo 2. ARGs intentionally blur the line between the in-game and out-of-game experience giving them the potential to become extremely immersive. 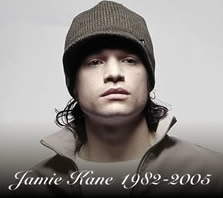 Well it seems that the BBC have decided to get in on the action with their own “online adventure“. They describe it as part game, part drama, part murder mystery. It’s about the tragic death of Jamie Kane. For those who don’t know, the singer released three albums, one with boyband Boy*d Upp (described by press as “the anti-Westlife”) and two after going solo. His untimely death at the age of 23 prevented the release of his latest single Torn from the Sliver of Light album. All of his songs can currently be streamed from his official site (see link further up), but I’m not sure for how long they’ll be available.

This really highlights the BBC’s commitment to embracing new technology in media entertainment and I’ve already been impressed by their willingness to accept downloadable programming (as opposed to broadcast) at the same time as most distributors are condemning software like filesharing software like bittorrent. Instead the BCC are allowing online users to download episodes of comedy series The Mighty Boosh before they are aired. Despite some limitations, the wikipedia furore and the fact it’s (strangely?) aimed primarily at a female teen audience, it features a reasonably detailed chatbot (provided you’re not actively trying to trick it) and smooth integration between different forms of communication and information, so do support their new endeavour and give it a whirl to see where they’re heading. Besides it’s summer, it’s not like you’ve got anything better to do…

The Soundtrack To Your Life