As a PC gamer the choice was always simple: PC Gamer or PC Zone; the question was usually a matter of price. Having moved back to consoles again (I owned a SNES but then switched solely to PC gaming until the release of the Xbox tempted me back) the water is rather muddier. The problem is that the specialist console-specific magazines have a vested in interest in promoting the platform positively in order to ensure there is a market for their own magazine. It is hardly a concern in the PC arena since their is little worry about computer gaming going anywhere!

The “official” console magazines often sound like little more than PR devices filled with more marketing rhetoric than the publishers’ own press releases. It is, one fears, hardly an impartial basis from which to receive news and reviews. The unofficial magazines may gain a little credibility by their distance, yet still share the same vested interest in buoying the numbers of their target demographic. Their flaw is that, due to the proprietary nature of the console media formats, they are unable to bundle demo or content discs, but simply provide video-filled DVDs.

Things are now changing for several reasons. Xbox Live renders the demo problem redundant as they are all readily available via the Marketplace. With the prevalence of broadband connection speeds “exclusive” videos are hardly deserving of the moniker now that most are readily available through sites across the internet within a week. So the very concept of the bundled disc, once so important in the selection process, is now largely redundant. This leaves the reader free to judge magazines based on content alone. 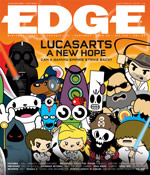 Browsing the rack a few days ago, the only magazine that stood out was Edge. Selling itself as about videogame culture, everything about it is clean and refined from the notable absence of an extraneous disc to its round price of exactly £4. Covering every gaming platform guarantees some articles will be irrelevant, but the broad outlook and the focus on the development process as a whole results in a far more grounded view. Gone is the feverish need to promote everything, replaced by the desire to talk only about what they love — good games.

Sam And Rosie Tie The Knot