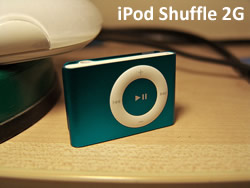 Yesterday I picked up an iPod Shuffle 2G. Just to hold it, to see. The pictures don’t really prepare you for just how small the second generation device really is and despite my best intentions I bought it. For myself. The crazy part is that I love it. I’ve realised that the lack of a screen or ability to see and select what you listen to isn’t really a drawback. Unlike hard drive players, 1GB of music is so little that there’s really no need for the hassle of navigating menus and the simplicity of this player is just stunning. In some ways it almost gives you too much control — a single play/off button would have been enough. You see the Shuffle is not so much about playing the music as experiencing it, and that journey is imbued with greater significance outside of the user’s hands. Being unprepared for the next song makes it that much more powerful as a result. As you can see I went for the blue/turquoise model. I felt the silver one was a bit dull, and while colour coordinating turquoise might be problematic given my wardrobe, at least I won’t be losing it!

The clip is also inspired. I never realised how reliant I was on pockets before, but they are constantly stuffed with junk every time I leave the house. Now I can streamline my appearance by clipping my music on the outside, and of course bragging rights are far easier when your iPod is on full display rather than hidden away in some pocketed crevice. No jacket in the summer? No problem — clip it to your shirt. Want music while lounging around the house? Easy — clip it to your boxers!

I know I’ve given Apple a hard time in the past and I may not be changing my views entirely, but this experience has definitely opened my eyes. I doubt I’ll be subscribing to AppleTV any time soon, but I am eyeing up those Mac Minis. While they might be limited in components and upgradeability, I am realising that in the modern household form is more important than function. We have become so focused on specifications and technicalities that we fail to realise we already have what we need. Technology only adds to that, and so we should only embrace to the extent that it looks stylish enough to enhance our lives beyond those basic needs. Understanding that is Apple’s triumph and now I can’t wait to see what Steve Jobs is able to accomplish with the iPhone.

EDIT: As many of you realised this was indeed an April Fool’s joke. I have not bought an iPod Shuffle, which remains one of the most moronic technological devices on the market. The entire commentary is very tongue-in-cheek except for the problematic nature of colour coordinating a wardrobe with turquoise electronics. It’s hard and I don’t recommend trying it yourselves. The photo is by Daniel Morris via Flickr.