Law school exams are over which gives me a week or so respite before the electives course begins. This also means we are being divided into new classes so the gang I’ve got to know over the last six months has been split up. I’m sure we’ll still see a great deal of each other, particularly with our usual ‘spoons hangout still just 30 seconds away from school. 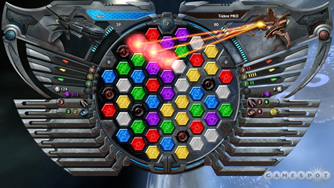 GDC is supposedly a convention for game developers to share ideas and innovative solutions to challenges they have faced but, perhaps fuelled by the demise of the old-style E3, it is becoming more of a media circus. Marketing has clearly come to the fore with announcements of several new titles. One of these is Puzzle Quest: Galactrix. The original Puzzle Quest was one of the few games that successfully bridged the divide between the casual gamer and the more hardcore, with its basic puzzle game heart coupled with some deeper RPG elements. The end result was that Kirsten and I were both hooked for quite some time. I am pleased to see the sci-fi themed follow-up is not simply the same Bejewelled clone with a new skin. While not quite a sequel (one of the devs described it as a “cousin” to the original) it mixes things up with a hexagonal board and an interesting approach to gravity — when you match gems, new ones drop in along that axis rather than vertically downwards. Hopefully it will again appear on a plethora of platforms so that everyone can enjoy.

I have grown bored with the Oscars so while I still take a cursory glance at the nominations and winners, actually watching the ceremony is totally out of the question. Part of the problem is that from the list of nominees I can usually pick the big four (best actor, actress, director and picture) straight off even if I haven’t seen the films in question. This year was no exception. This makes it somewhat difficult to get excited about a ceremony that supposedly derives its tension from the winners being announced. Of course it’s always a pleasant surprise when there is an unexpected winner (like Crash) but those are certainly the exception.

It must be the season for massive acquisition offers. Yahoo!’s board is currently facing the possibility of being sued by shareholders for rejecting Microsoft’s high profile advances. Meanwhile Electronic Arts, now the 2nd largest game publisher in the world, has offered $2 billion for the troubled Take Two. The smaller publisher holds a host of developers including Rockstar and the Grand Theft Auto franchise. With its fourth instalment due for imminent release it stands to make very large profits to smooth its recent turbulence, and will likely wait until afterwards to consider offers. However the mainstream press has ignored the fact EA probably has its sights on the publisher’s wide range of sports titles which, while snubbed by many for their incremental improvements in annual releases, sell in the millions each year and are the chief rivals to EA’s own sports games.