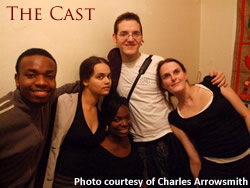 On Saturday a group of us headed to the ADC to see Shamini acting in In The Blood. She was excellent in what we hope was not method acting as she attempted vehemently to establish. The play itself is an unsettling tale concerning Hester, an oppressed black mother of five children by different men. The actors and actresses playing the five children each take on a second role depicting a figure who has abused their relationship with Hester. In this way the audience’s own conservative ideals are harshly thrown back in their faces as we first see the characters to whom we are better able to relate act despicably and then explain their actions in soliloquy. A minor abuse of authority or power — a momentary error of judgement — gets out of hand with consequences they never desired on envisioned. Its flaw, if there is one, is that Hester lacks a sufficiently sympathetic portrayal by comparison. We are able to relate far better to the supplementary characters not solely because of our inherent and apparent conservative views, but because there is simply not enough about her to like.

Its strength lies in its production which creates a fantastic atmosphere. Its strong use of reds and blacks was immediately evident in the costumes, staging and lighting instantly evoking something dark and intimidating. Rather than a typical musical accompaniment, there is a continuous background ambient sound created by silhouetted figures atop the bridge over the stage, banging on metal drums and scaffolding to create an insistent beat. Their continual, shifting presence over the action creates an encroaching sense of claustrophobia, as if the audience itself is trapped in this world along with the characters who inhabit it. Combined with this was the “interactive” performance bleeding the line between reality and the stage prior to the start and during the interval. On arrival the auditorium had kids rushing around amidst exotic dancers; blocking entrance to our row was a patron in an argument with one dancer standing atop a seat — we took the long way round. Meanwhile flirtatious prostitutes roamed the aisles soliciting clients from the theatregoers in a manner more unsettling than arousing. In painting this gritty, desperate place, the approach was unrivalled.

Child’s Play is up and running for another year. For those who haven’t heard me promoting it before, it is a charity founded by the guys behind Penny Arcade and supports children’s hospitals by providing them with books and games. Ideal for gamers, but even if you are not it is a great way to support sick kids locally (in the UK they have teamed up with Liverpool’s Alder Hey Children’s Hospital). If you feel the strange lack of horrific natural disasters this year has stunted your generosity, perhaps this is the ideal opportunity to rectify the problem.

Finally, the Vista-bundled Windows Mail had many scratching their heads in confusion as the apparent successor to Outlook Express seemed like more of a step back than an evolution. However the unhelpful mouthful Windows Live Mail Desktop has revealed itself as the real descendant of Microsoft’s basic email client and a worthy one at that. Perhaps more surprising is inbuilt support for Microsoft’s rivals, Yahoo! and Google.