“If you knock yourself out, I’m still going to Formal…” 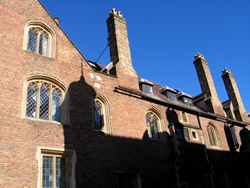 The Land Law supervision went surprisingly well and, it being the last supervision of the week, I decided cutting loose was in order. Wednesday night was the Ball Committee’s first Formal and as result it’s finally started to take on a similarly familial feel to that shared by the Globalist editors. We had several freshers with us who needed to be properly introduced to the fine art of the penny. Naomi and Angela joined in fast, while I both pennied and was pennied by a Fellow that evening, a new one for me. After a quick drink at the pub since the College bar was closed that evening for refurbishment, our publicity gurus Dave and Lucy had arranged an impressive queue-jump at Cindy’s (ahem, sorry, Ballare) since we’re hosting our launch bash there. Apparently the Johnian lawyers were there but I somehow managed to miss them, though their pained expressions the following day at the faculty spoke volumes about the exploits of the preceding night. Despite being up for a 9am lecure I spent Thursday feeling bizarrely vibrant, albeit utterly exhausted, since my body tends to deal with a little alcoholic excess by nicely flushing out my system, making it a fantastic detox.

Firefox has reached an incredible 100,000,000 downloads within one year of release, so congrats to everyone at Mozilla. Version 1.5 is now imminent, with release candidate builds being tested out at the moment. The best will soon be getting even better. Meanwhile OpenOffice v2.0 has finally emerged and is looking very swanky on Lyds’ machine. Amusingly one of the possible responses in their registration questionaire to “what made you choose this product?” is “it’s not Microsoft”.

After speaking to Joe during Formal there may also be something in the works with Varsity. More on that if it transpires.

The Face That Launched A Thousand Magazines