“I’d Rather Be Lucky Than Good”

Having said that I had no photos from Hallowe’en, Sparkie and Shamini were quick to offer their own so (somewhat belatedly) I thought I’d let you look at a couple while I write. 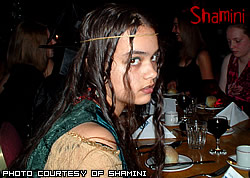 Having survived the traditional — nay, institutional — week five blues, I collapsed into bed last night and eventually managed to pry myself from the warm sheets at about 3 o’clock this afternoon. Slovenly and slothful, I am sure, but I really needed it. A whole bucketful of the Colonel’s finest chicken later, I was feeling very much recharged and ready to tackle the work for next week. It’s strange how from one end of the week it feels as though we have only just arrived, and from the other term seems almost over. Time is not just relative, in Cambridge it’s telescopic: a day could be a week, a week a year, and yet the whole term feels like merely a handful of days. 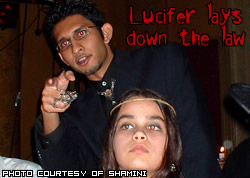 Having resisted its eerie siren call for several months, someone made the mistake of mentioning eBay not just within earshot, but directly to me. In just a few days I’ve nabbed several bargain DVDs, but as ever, the bargains do add up after a while. I’m hoping the relapse will be brief, but at least it looks to be profitable (well, insofar as spending money can be). Amongst my recent acquisitions is Manhattan. As one who has never explored Woody Allen as well as one ought, I have to say it is extraordinarily clever, witty stuff. It makes one wonder where the modern, illiterate comedies come from and why on earth we put up with them. I am particularly intrigued by Allen’s latest project, not least because Scarlett Johannsen stars, an adulterous little British film called Match Point. “The man who said ‘I’d rather be lucky than good’ saw deeply into life,” intones its lead. Strangely, I’m feeling rather more lucky at the moment…

Incidentally, my current must-see is the very original, very funny Kiss Kiss, Bang Bang with Robert Downey, Jr. and Val Kilmer. It’s generally being touted as the best work either of them has done in about a decade, so if you’re interested in coming along then let me know.