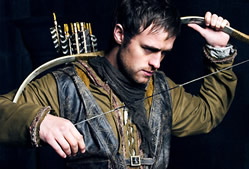 At Rav’s recommendation I decided to give the new BBC version of Robin Hood a go. I had been expecting campy entertainment in the style of Xena: Warrior Princess or Kevin Sorbo’s womanising Hercules. I was pleasantly surprised to discover that they have aimed for a little more depth than those staples of Channel 5 weekend afternoons (I may be somewhat out of date, since it has actually been several years since I subjected myself to the torturous haze of white noise that is Channel 5’s programming).

Yet I’d be lying if I said I found the first episode particularly enjoyable. It all worked, but there were too many niggling flaws. The most obvious is newcomer Jonas Armstrong’s lack of charisma as Robin. Playing too much to Robin’s honour and nobility, he forgets to have fun as an outlaw.

And then it struck me while watching the second episode. The writers have a serious political agenda here, hidden away in each episode. The political undertones in the first episode were subtler as Robin decries war upon his return, but it becomes far more blatent by the second. Guy of Gisborne discusses how the time of war allows them to “hold and execute outlaws without trial” and suddenly the striking political parallels are revealed. Robin ponders aloud why we would fight abroad when “the real cancer is right here”.

There is barely any discussion of the issues raised so don’t mistake this for some highbrow remake with aspirations of intellectualism. Fathoming its intended audience becomes difficult — is this really just a vehicle to deliver its message to those less aware of current affairs? If so, will they even notice?

How The Magic Happens