Continuing the theme of the last post, “Rockonomist” Alan Krueger recently announced that filesharers are the reason that the cost of tickets to live performances are increasing. He alleges that previously artists were willing to underwrite some of the cost in order to boost CD sales. Since people are not buying their CDs they can no longer do this. The argument conveniently fails to acknowledge the fact that artists receive a fractional amount of CD sales anyway, and the simple market economics of the situation is that the reason Madonna’s concert tickets now cost £170 each is that enough people are willing enough to pay. And while the already rich mainstream artists may lose out, it seems that smaller bands are still profiting from the increased exposure granted by P2P networks. 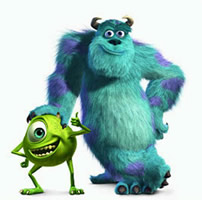 My assertion that Monsters, Inc. remains the pinnacle of Pixar’s work so far annoys many fans, but having finally obtained the DVD I am more convinced than ever. It marked a huge leap forward in animation quality both from their previous work and their competitors Shrek and Ice Age, particularly evident in Sully’s realistic fur. And while it lacks the visual detail of Finding Nemo, Monsters more than makes up for it through unique storytelling. Its tale of a monster world powered by screams obtained through artificial doors into children’s closets is so bizarrely conconcted and yet utterly immersive with an exceptionally crafted cast of lead characters. Mike and Sully are the perfect duo for a children’s comedy, while Boo is just indescribably… cute. Its witty dialogue is matched by clever visually gags rather than mere slapstick, and with perfect length and pacing, it is a triumph from start to finish. While I do love their later work too, it will be hard to surpass my love for the Monsters who scare because they care.

And if you thought you were trying hard to develop a revision-avoidance procrastination reportoire with sufficient sophistry, prepare to be shamed by this Japanese video.