Hell is a Crowded, Lonely Place

I have long been a proponent of the value of games in honing skills with real-world application, be it basic numerical skills in card games, reaction-enhancing twitch shooters or the more cerebral puzzle solving and strategising. Arguably none captures this moreso than Solium Infernum. Broadly it operates like a giant game of Risk/Civilisation set in Hell, played over a month or two. It’s turn based with people sending in their orders when they have time, which are then processed simultaneously and the results sent back.

What sets it apart is the strict protocol of netherworld diplomacy. One cannot simply invade another Archfiend’s territory on a whim, but instead but must first have a valid vendetta due to an insult or refused demand. It takes several turns to go war. The flurry of emails (ideally in character) in the turns in between is filled with the backstage politics and deceitful intrigue that are sure to destroy friendships over the course of a game. 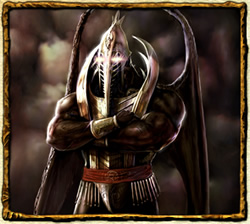 After reading a detailed game report at Rock, Paper, Shotgun, Adam, Sam, Sparkie, Tom and I all started a game. You know, because I clearly like them too much. I have discovered that nothing drives the human competitive urge so much as the profound knowledge that someone tried to convince your friends to destroy you. Unfortunately since they all read this site, that’s about all I can safely reveal for now. Suffice to say my anagrammatic alter ego, Peril-Eye Lawman, has his Eye firmly fixed upon the infernal throne.

Finally, links from the past month: