Apologies for the lack of updates during the last week; I’ll try to deal with things in order. My birthday passed by quietly with a pleasant meal at The Royal Garden, a Chinese restaurant in a secluded wood. I may do something a little colourful back in Cambridge at the start of next term. For the most part presents were less about cool gifts and more about debt reduction, although a box of assorted transatlantic goodies from Jane contained Oreos and a pink XL Izzo’s t-shirt to go with my grey one. Maybe now I can get mine back from Kirsten… 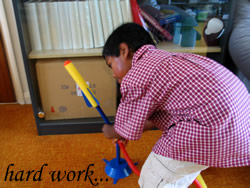 Over the weekend we had friends of the family over on Saturday followed by family for a birthday celebration on Sunday. Saturday’s attendees included Uncle Kumar who is currently involved in organising a disabled trek across the Sahara in customised Land Rovers with hand controls (he has limited use of his legs). But then this is the man who, when asked about his Porche’s top speed of 155mph, replied, “though I’ve only managed 148mph on the Autobahn so far.” Meanwhile Sebastian can be seen fulfilling his ambitions as a rocket scientist. Or possibly a heavy ordnance engineer given his wild-eyed cries of “make it hit Daddy!” Kirsten was unimpressed when I tried to explain the physics of the air-propelled device to him, and then plain perplexed when he proceeded to describe it himself a few minutes later. 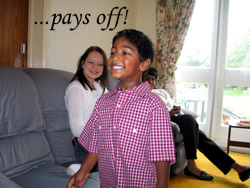 This morning I was contacted by the editors of the online magazine British Expat, who informed me they had come across my photographs at morgueFile and selected one as their Pic of the Week. The photograph is question is a close up of Romina, replete in her Bharatanatyam costume, make-up and jewellery. I was always pleased with its striking vibrance (due more to her than me!) and I am honoured to receive recognition from elsewhere. Their description includes a link to P-2006, so a warm welcome to all the Expats arriving from there. Feel free to check out the rest of our gallery. Speaking of photos, a selection of images from Paris are now available for your ocular enjoyment.

And finally I am now doing a three day stint at Berwin Leighton Paisner, my last law placement for the summer. Three days is hardly enough to get to know a firm properly, but it will give me an insight to a few new practice areas (Competition and Litigation).

Last of the Summer Work