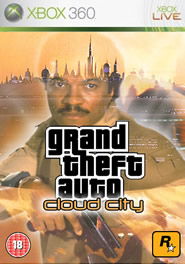 Discussing the future of the GTA series now that it is receiving an immediate multiplatform release, someone suggested that the modern day setting was becoming tired and they should create a futuristic one. Aside from the fact it is a horrendous idea that would destroy the core appeal of the game, it was a great idea. So I began to muse on how such a world might look. Following in the footsteps of Vice City, there was only one possible future location: Cloud City, home of Arch-Pimp Lando Calrissian. And what better story arc than to follow than the fortunes of this “scoundral smuggler turned politician turned miltary general” protagonist. Actually, now it’s starting to sound like a good idea…

The reason for relating this extended musing is that the same developers, best known for this violent gun-toting carjacking franchise, loathed by mothers and political upstarts everywhere, have just released a sports game. Nay, a table tennis game. One might see it as a dark confrontation with paddles and hollow balls replacing more traditional projectile weaponry, but in truth it bears more similarities with Pong than GTA. And yet it has been heralded by many as the best next-gen multiplayer experience thus far. With a ferocious speed that makes it far more compelling than it’s tennis counterparts and a finally tuned yet intuitive control system (for example a gentle rumble indicates aiming off the table, with stronger feedback the further you stray), it shows there is real depth in the company’s skills. Oh, and it looks pretty too.

Neil Gaiman has a new collection called Fragile Things coming out in September. If it’s anything like the fantastic short stories in Smoke and Mirrors, I will certainly be happy, appetite satiated having had nothing new since Anansi Boys last year. A mock-up of the cover shows translucent paper that looks very pretty but will likely get ruined within minutes. The UK cover, he has explained, will be completely different. So not to worry.

Finally, I forgot to mention that Sparkie now has tong-duelling photos from Ian’s birthday.