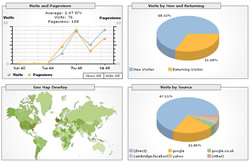 My thoughts on Google Analytics as promised. As one might expect from the search giant, it is a very different take on the generic site statistics to which you may be used. Filled with graphical representations, it aims to offer true analysis rather than merely raw data. Setting up “goals” it provides information on how successful the site is in achieving them. Ideally designed for those selling a product, it allows you to see the efficiency of your site in acquiring sales. Unfortunately the interface is designed with this sort of “executive” use in mind, making the system of collapsable menus rather unweildy until you know the location of what you are after.

However, even for general use, it provide some interesting options. The graphical overlay geo tracking, for examples, displays markers on top of a world map to show from where your visitors come. The more often they visit, the larger the marker. So I can now see the regularity with which certain indivudals read the site from, say, Harrow or Colchester.

It seems that the use of permalinks on the site has really boosted the number of visitors who arrive here through search engines. With the title of any post now appearing in its URL, we are actually the top ranked result for certain strings like “Silent Garfield“, whilst others are seeking all sorts of things from the “ingredients of Skittles Vodka” to “Jamie Kane albums”. It’s good to know the site is able to direct other people towards what they are after as well as earning a few new readers.

Although I’m pleased with the new system, it won’t be replacing the alternative sources of raw data I previously used. They simply allow a flexibility and depth that isn’t available in Google’s analysis. Yet for its pleasant appearance and the ease of excluding my own activity on my site which can significantly skew statistics, it will be by most regularly checked source.

Best Picture That Nobody Saw