If there’s one thing to be said for Western Capitalism, it certainly gets things on the shelves. Many of you love to scoff at the Shiseido Men products I recommend with religious fervour and use like a pansy. Allegedly. When I started using them 2 years ago it was virtually impossible to find in the UK: I knew of only two buildings that sold the precious liquids in the whole country. Now, even in this remote end of Germany, I can pick them up for less than I would back home. If that’s not worth breaking down a wall for then I don’t know what is. Aside from, you know, freedom. 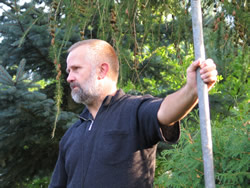 To celebrate Kirsten’s dad’s birthday on Wednesday the grandparents were here. I was also able to meet her older brother for the first time. I have always praised socially lubricatative properties of alcohol and once again it seemed his unwillingness to risk attempts at English gradually evaporated with each glass of whiskey. Although the womenfolk seemed a little stressed by preparing the bounty of food (and yes, I too was pressed into service) it was a rather enjoyable evening. 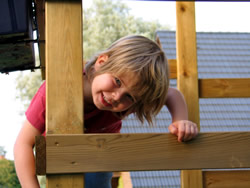 After seeing some photos I took of Nele in the garden, her mother asked me to take more to show friends of theirs, mostly to show off her baumhaus (treehouse, only this one didn’t really involve a tree — other than being made of wood, that is). I ended up with possibly the cutest “photoshoot” my camera has ever held. Unlike the distracted, fidgety girl I had tried to photograph before, I think Nele found she quite enjoyed posing with the rather rudimentary directions I was able to act out for her. 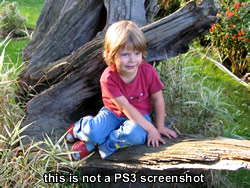 Gamers amongst you will probably have heard by now that despite Sony’s bold statements of 2 million units worldwide at launch, the PS3 numbers will be closer to 500,000 and the European launch is to be postponed until spring 2007. It gives the 360 a second uncontested Christmas in Europe which must be a crushing blow to Sony’s European division. What is surprising is not so much the delay or the overall history of the console: last year’s Killzone guff, the poor E3 performance, the price, etc. — it’s the fact they will still sell out every single console they produce at launch. All I can say is it better do something pretty damn impressive, especially now that Assassin’s Creed is, as I have suggested for months now, officially coming out on the 360 as well. Boo-yah! as they say.

Failures of the Dishwasher Generation