Frolicking in the Sun and Rain 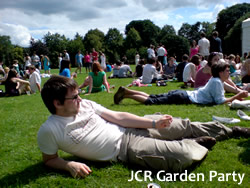 May Week got off to a decidedly damp start but, the weather notwithstanding, students here have taken to the outdoor revelry with suitable drunken aplomb. With graduation looming, the third years in particular are, as Stephen Fry would have it, carping the diem in earnest. Things kicked off with Lufa’s lovely birthday do last week as a warm up for the Cranworth annual dinner in the evening with its delicate mix of students and established lawyers. With jobs already secure, our end of the table was able to avoid the traditional sycophantic pursuit and just enjoy ourselves instead, much to everyone’s delight. No less than three wines accompanied the five course meal along with the inevitable port conclusion. Andy W was up from London so we caught up in the pub after dinner, followed by a retreat to Jamie’s room for further drinking and a meandering discussion of television shows into the early hours. His transition from teetotal to serious drinker without missing a beat is heartwarming. 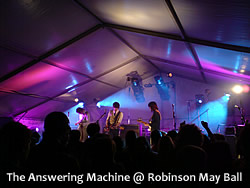 Friday marked the first of the trio of May Balls I shall be attending this year: Robinson, Clare and Downing. At a sprightly £65 Robinson is considered a “warm up” Ball by many, to ease one into the bigger affairs of the coming week. In fact they did a fantastic job offering a range of vittles and activities that genuinely challenge the others. What it lacks are the expensive details and sheer sense of excess that mark the big guns of May Week. The Downing Ball Committee arrived en masse and by chance Kirsten was also able to snag a ticket at the last minute. We all had a great time though most of us left early to reserve our energy for the week ahead. The Midsummer Night’s Dream theme culminated in a reduced theatrical performance of the Shakespearean frolic with a wonderfully modern mischievous Puck. In a pleasant moment of continuity one realised the brightly clad faeries on stage were the same people who had entertained the queuing crowds before the Ball, handing out guide booklets. 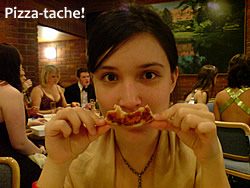 Today was the JCR garden party and a handful of pictures have been added to the new May Week album which will be gradually expanded, ideally daily. For those who like their news visual, Sparkie has also done a sterlingly efficient job of sharing photos from both Lucia’s and Suicide Sunday. Although I took a host of photographs at Lucia’s birthday party, the majority were with her camera so I need to recover those from her before I can share them. I also discovered that my phone camera is able to pull of some fantastic shots in low light conditions in which my real camera would struggle. The shots accompanying this post were all taken on my K800i and not a proper camera. At full size details do become hazy, but the results (particularly the band in the tent above) still impressed me.

Exams, Ailments and Other Things To Avoid