Friendly Advice From A Lion 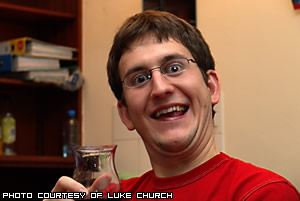 Sparkie held a great little soirée last night. I may have been a little late in arriving but then didn’t leave until nearly 5am (aside from briefly disappearing to say bye to Irina at 3am, accidentally waking her and thereby “saving the day” as she only just made it to the bus taking her to the airport). I finally got to meet the the elusive Luke Church properly, though he’s allegedly heard much about me from Kirsten (being a CompSci) and has already visited P-2006. Of course I’d be lying if I claimed not to have checked out his website already, so it would appear our infamy is mutual at best. If you’re very lucky he might donate a photo from yesterday to accompany this entry. 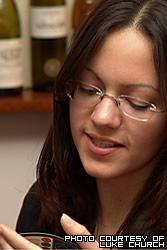 I love giving opinions but hate giving advice. Opinions are transitory and can be altered at will whereas advice is something that can come back to haunt you later on. You know, if you happen to be wrong. However, I received some advice regarding Narnia that I think it only fair to pass on. Despite the trailers and clips and the involvement of Weta, do not approach it expecting something in the style of Lord of the Rings. This is very much a children’s story, exceptionally well crafted, but arguably somewhat sterilised given its intended target. That is not to say its audience is not supposed to include adults, far from it. Essentially the tone is simply that of the books which is, in my opinion, ideal since I’m hoping for the film to evoke the same sort of magic, which is very different from LOTR.

I’ve not been keeping a close eye on casting for X-Men 3, but from the “announcement teaser” (whatever that means) both Angel and The Beast look awesome. However I then discovered the man beneath the blue fur is Frasier. Now, I’d hate for Kelsey Grammer to be unfairly typecast as much as the next man. After all, he only played the character for ten years. We can get beyond that. I’m sure. If we try. Hard.

Child’s Play has finally added a UK hospital (Alder Hey Children’s Hospital in Liverpool) to their list so do consider donating if you feel like being charitable this Christmas. They’ve broken the $200K mark already and it’s a great way to show how positive the gaming community can be, contrary to what some would have you believe.

Rebel Without A Pulse