Now is the time of year when I can start getting a little excited about a new Harry Potter. Okay, maybe “excited” is the wrong word given how the hardcore fans show their enthusiasm. Whilst not being hugely enthralled by the books, I am now a stalwart fan of the film franchise. The first two were competent distractions, albeit lacking any real magic and with variable performances from its inexperienced child actors. Last year’s Azkaban changed all that. Admittedly I was somewhat biased in my approach since I was a huge fan of the new director Alfonso Cuaron. Nevertheless, the maturing young actors and darker tone (not to mention Gary Oldman) made for a truly spectactular film with top notch realism in its special effects. I was somewhat underwhelmed to discover that Goblet of Fire was being helmed by Mike Newell, best known to most for Four Weddings and a Funeral which I found okay, but I am told several people really loved. Of course, the man also has Donnie Brasco in his past so he’s nothing if not versatile. Nevertheless the footage that has gradually emerged, climaxing in the biggest premiere event Leicester Square has ever seen, has definitely suggested that this film is going to be something rather special. I may not be queuing up for opening night tickets, but I am looking forward to it. 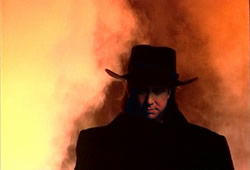 I finally picked up Totally Bill Hicks, which was recorded in London, from eBay the other day. I’ve been a fan of Mr. Hicks for a couple of years now, having been bizarrely introduced through Tool‘s Ænema album. There are a number of reasons he’s one of my favourite stand-up commedians. despite still being virtually unknown. Sure, as NME point out he’s consistently hysterical. Which helps. But there’s something more to this man, behind the fire and anger. He’s truly passionate about what he does; not just the comedy but the message behind it. He sees the world and he sees the wide disparity between what humanity could be and what we are. And it pisses him off. I found it incredibly enlightening last year to listen to his rants about the first Gulf War and realised that it was applicable in its entirity to this Iraq war, right down to his attack on President Bush! He’s the sort of angry voice that one assumes must have killed himself when hearing he died young (32), but perhaps stranger still it was cancer that took him.

Those of you who click on the links here will have noticed that Penny Arcade has been extensively swankified in line with the design for Child’s Play. The downside to their upgrade is that their file structure totally changed so every link from here had to be altered. They should all be working again now.