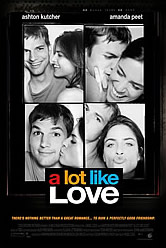 Ally and I eventually managed to meet up today, seeng A Lot Like Love. The film follows the chance meetings between its two romatically linked stars over the course of six years. Although I generally detest Hollywood’s sickly sweet and unrelentingly unrealistic romantic comedies, this was superb. Largely the film succeeded through the chemistry between leads Ashton Kutcher and Amanda Peet, the most palpable, realistic chemistry I’ve seen captured on screen since Before Sunset, and that’s saying something! Whilst certainly very cute, by dumping the usual 2-dimensional characters, manufactured script and postcard locations, it always feels genuine and retains an air of freshness and originality rather than being cliché and stereotypical (the clumsily artificial ending notwithstanding). Do see this film, if only to understand how the romantic comedy can still be done right.

After an amusing bout of clothes shopping with Ally (without actually purchasing anything) I headed to the park to read, something I haven’t really been able to do properly in the past year. My current book is Iain M. Banks‘ sci-fi Culture novel Excession. He’s one of the few science fiction authors who still writes intelligent utopian futures so it’s nice change from the action-orientated dystopias we’re used to. And then curry night. The usual suspects were there, along with Chop‘s sister and a friend from uni. All in all, it’s been a fun, sociable day off from my hectic schedule.

And perhaps the most touching thing about today’s film was that its most poignant line isn’t delivered through dialogue. Rather, it is signed by Oliver’s deaf brother Graham:

“This is your life, right now. It doesn’t wait for you to get back on your feet.
Your life, it’s already happening…”