Steph has suggested that the latest round of Facebook updates were designed to make us fail exams, and with their inconvenient timing it is a persuasive theory. Personally I’m more concerned about the House of Lords delivering a key ruling on divorce settlements right before Tripos. When even the Lords are sabotaging your law exams, it’s hard not to take it personally. It all makes me hanker for the good ol’ days of Edexcel.

Sparkie recently recommended McAfee Site Advisor which has plugins for Firefox and Internet Explorer, sitting in the status bar to warn you about the safety of the site you are browsing, with regard to popups, spam and spyware (in which case you should not trust downloads or submit forms). It also places warning icons next to results in major search engines to alert those which may pose a threat. I was happy to see that meewella.com had already been greenlighted.

The stylised teaser for Superman Returns contained barely any content but garnered much interest, while the full trailer met with a decidedly mixed response. Kevin Spacey’s Lex Luthor was a suitable fulfillment of Gene Hackman’s legacy, but overall it failed to herald the man of steel’s return with the epic sense that was suggested by its forebearer. However, a new UK cut of the trailer mends many of its flaws, with different construction and superior pacing. And the final shot is just comicbook cool. 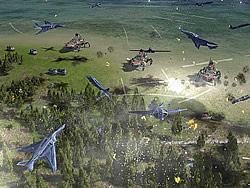 The Supreme Commander trailer shows off just the scale that journalists were raving about at E3, zooming out from what appeared to be an already full map to show several similarly sized conflicts occuring at once. The variety and volume of units engaging one another makes this the first time in a while that people may be upgrading their computers in order to play an RTS. Of more concern, however, is whether controlling so many units in multiple engagements at once can be achieved without reducing the player to a drooling epileptic mess on the floor. An impressively intuitive user interface will be only way to achieve this, but the game deserves recognition for its visionary scale, the biggest step up I’ve seen since the “Total War” series emerged with Shogun.