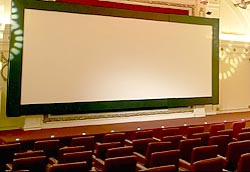 I recently visited the first of the independent cinemas on my list, the Electric Cinema on Portobello Road. I had heard of its sink-right-in leather seats but this did not prepare me for the incredibly spacious venue and general comfort. This theatre conversion was clearly designed by a cinema lover rather than a moneymaker. Indeed its spacious interior is the very antithesis of the multiplex mentality that attempts to cram in as many seats as possible. Instead one finds individual seats with two arm rests to yourself, as well as a table between seats with drink holders. The bar (of alcoholic variety in the European fashion that is now sweeping arthouse cinemas) is actually situated inside the single screening room, so one could hypothetically have a cocktail mixed during the film without missing a moment. Another minor touch is that the film’s sound is played in the bathrooms so that if nature does call, one need not worry about missing some vital plot element. Of course the downside to a single screen is a limited range of films on offer, but their selection generally seems fresh and interesting. 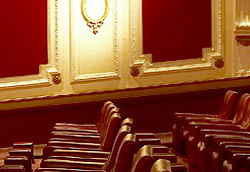 And I haven’t even mentioned that half the seats also have leather footstools so that one can lazily recline. The ultimate indulgence is in the form of two double-seater sofas (again with footstools) at the rear of the room, perfect for couples. This is a relaxed cinema that may not boast the largest screen, but is able to combine the big screen experience with a level of comfort to rival the home theatre. And all this for a £7.50 matinée ticket, quite reasonable for a London cinema. Expect to pay around £12 for evening screenings, and a little extra for the sofas. 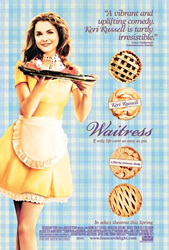 The film was Waitress, perhaps the perfect expression of pleasant cinema, and ideal for a lazy Sunday matinée. It has the most delicious opening credit sequence I have yet seen, in what can only be described as an ode to pie (a recurring theme, beautifully and mouth-wateringly shot). The film is set in small town USA following the life of an unhappily married waitress who starts an affair with her doctor after accidentally ending up pregant following a drunken night with her ill tempered and controlling husband. Despite which it manages to be sweet, humorous and generally charming. That Nathan Fillion (Firefly’s Captain Malcolm Reynolds) plays the doctor is an added bonus. In some ways its appearance is deceptive. Beneath the bright exterior the core is really a dark comedy but with predominantly entertaining and endearing characters. The film displays the good and bad qualities of the word “nice”, and undoubtedly gained additional attention due to the tragic murder of its director Adrienne Shelly, who takes a supporting role. That it will be the last film she directs imbues its awkward and quirky tone with a subtle wistfulness. And you will leave craving pie.