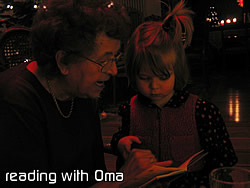 Here in Germany the majority of the Christmas celebration occurs on the evening of the 24th rather than Christmas Day itself. This includes a visit from der Weinachtsmann, the slightly ominous sounding German equivalent of Father Christmas, which kept Nele buzzing all day long. Prior to that we attended a children’s service at a local church which included a nativity performance by a group of cute (if worryingly blonde haired, blue eyed — “Only the best!” Kirsten quipped) kids.

Andre, a friend and former colleague of Kirsten’s from the club at which she used to work, was our Weihnachtsmann and did a sterling job. I always thought there was a veiled insult in being asked to perform as a rotund bearded fellow in fur-trimmed garb. Nele was required to sing for her a presents, a procedure which I am told is traditional, though fortunately a torture I was spared. Fortunate for everyone since my ability with German poetry pretty much ends with “Maus/Haus” (yes, Nele taught me that one too). For a young child, rather than being from individuals, presents from all the family are delivered by der Weihnachtsmann or in more religiously minded families the unseen Christkind, an angelic Christmas child. 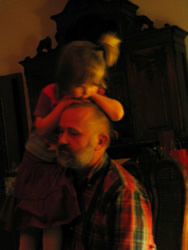 Traditional food differs from the English dry turkey and sprouts of which I am far from fond. On Christmas Eve the most common dish is actually a kartoffel (potato) salad, although due to the high apfel (apple) content of ours I redubbed it kartopfel salad. This was eaten with grandparents (and presumably any other immediate family members), while lunch on the 25th was for the household alone. Duck or goose is the main dish depending, I suppose, on the number in attendance. Kirsten cooked her first goose athough I had a slightly Hansel and Gretal moment upon being handed an entire hind quarter of the beast. It was difficult to shake the feeling that I was being fattened up. Not that it stopped me — it tasted great!