I ought to preface this entry by stating that this entry has nothing whatever to do with the del.icio.us social bookmarking system which I highly recommend, especially if you are a Firefox user as, when combined with the Foxylicious extension, it allows you to keep your bookmarks online and utilise them in the browser of whichever machine you are using at the time.

Our new PC arrived yesterday evening so I have been charged with its preparation for human operation, a process which largely involves uninstalling the bundled refuse with which any factory machine seems to be infused these days, followed by innoculating it against of the myriad of deadly threats that might slide down the modem cable at any moment. The case has a lovely visage when viewed from the front but, cunningly hidden in the website’s images, some idiot decided to slap these godawful white plates to each side of the case making the end result significantly less than the sum of its parts. On a superficial basis, that is. In fact the inner workings of the beast produce far more, performing nimbly and ably in almost every respect (my sister’s HP camera has been causing problems which I fear is not the computer’s fault). 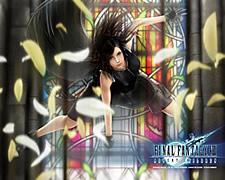 As I was to spend several hours assembling, installing, configuring and tweaking, you will be unsurprised to hear that I figured I may as well make the thing pleasant to look at, resulting in a beautiful picture of Advent Children‘s Tifa adorning my desktop. Although I don’t buy into this whole “Media Centre” malarky, it thankfully comes with an alternative theme that offers a subtler take on the diabolical gaudiness of the traditional XP blues, greens and, for some absurd reason, oranges (it grates somewhat, as you may have gathered, against my stylistic preferences).

A new black-clad photo of Spiderman has appeared, this time unmasked, quelling rumours that the previously released image was a photoshopped fraud. There is some fear amongst fans that their beloved baddie Venom may be upstaged as a villain by Thomas Haden Church’s Sandman. You may know him as the guy from Sideways — Thomas, I mean, not Sandman.