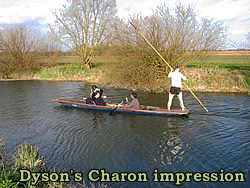 After the last rather controversial post, I decided to offer you something tamer today while I settle back in at home. On Saturday we had a large group excursion to Grantchester to end the term. I had always believed it to be much further away than it evidently is, the pleasant walk taking us well under 2 hours. We ambled past Jeffrey Archers house (or at least its grounds) with its various bizarre statues and objet d’art (think four foot hares). There was also the designated “cripple punt” for the ambulatory challenged Rav and Kueh. This took quite a while on the way there, but Dyson ferried them back almost as fast as we could walk (though in fairness he’s spent almost seven thousand years at Cambridge — certainly long enough to get good!). Kueh, on the other hand, took great pride in lazily lending no help whatsoever. 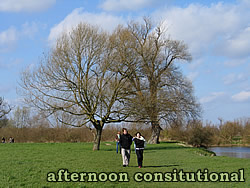 In Grantchester we lunched upon slightly expensive pub food in sunny garden out back. The weather was chillier than the previous day but at least it had brightened up once our walk was under way. Aside from certain malcoordinated individuals who insisted upon head injuries, luncheon passed agreeably without being particularly noteworthy. We then proceeded to walk along the riverbank to the Orchard Tea Gardens, our real destination if you were to ask Lufa. Stepping back a hundred years into a deck-chair filled garden with patrons quaffing varied teas and scoffing giant scones with jam and clotted cream is quite an experience. Browsing the literature it became clear why the myths about student life in Cambridge are still so widely perpetuated, as places like this thrive by playing it up. Cambridge students do not, in fact, lounge in deck chairs all day having cream tea. I wish we could afford to take take that much time off, but we can’t. Oh well.

A May Week return seems likely although the idea of a post-Ball breakfast less so, since someone will have to punt there and still be awake. So while we may have spent the day perpetuation Cambridge stereotypes, they are at least very tasty stereotypes.