Well the upgrades were a partial or at least a qualified success. The WordPress side went fine but there were some problems when upgrading Gallery. The new version has altered several of the core modules which, unfortunately, has ruined the meticulously designed code that made it fit perfectly into the Artist section layout. It now needs to be recoded from scratch, so for the moment I’ve set it up with an alternative theme that will allow you to still browse the photos which is, I suppose, what it’s really all about. 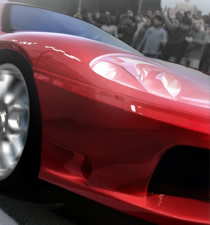 Kirsten decided to come down for a few days and has just headed back to Cambridge. She’s never really understood my fascination with videogames. For my part, I’ve never been quite so enthused as her with the combustion engine-propelled vehicular contraptions you may know better as cars. However, combining the notions in a melting pot so potent that its use may well be restricted by several UN Charters, I decided to sit her down in front of Project Gotham Racing 2 on the Xbox. The idea coalesced when I noticed her eyes glint while I watched a trailer for PGR3, one of my must-haves for the Xbox 360, perhaps more her ears pricked by the sumptuous growl of the engines (a sultry sound even I can appreciate). At any rate, although she will probably deny it all, after a couple of laps round the Kremlin in a Lotus Esprit she was hooked. Aided no doubt by the surround sound of the whining engine and ambient glow of the 32″ TV, I think she’s beginning to understand the allure of the 360 which I shall be purchasing this summer.