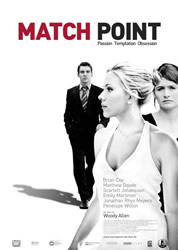 Kirsten got back Wednesday which may be why you haven’t heard from me. We went to see Match Point yesterday and bumped into Sparkie, Ollie and several of the old Kenny lot. A proper review will be forthcoming once I’m sat still in front a computer for long enough when not filling out vacation scheme online applications. As an insight into the way a comfortable marriage can gradually breakdown through secrecy, opportunity and (bad) luck, it works well. If approached as “Woody Allen does London”, it’s somewhat disappointing. Things like the overuse of an operatic soundtrack become distracting rather than, as Allen probably believed, evocative of the opulent lifestyle of the British upper class. Having it playing during a sequence in an art gallery, clearly silent, just doesn’t work. Nevertheless, some strong lead performances make it definitely worth watching. Match Point is also a prime example of trailer cheating. It’s a common enough occurance where the dialogue in a trailer is chopped to adjust its meaning from that in the film. In this case it stretches to describe not only different situations but completely different people.

Today Kirsten and I were moving her stuff back to Newnham, involving a cab ride during which our driver decided he was going to look for a divorce lawyer. Kirsten and I were arguing about the Umlaut (the plural of which is, it turns out, Umlaute and not umlauts) when said cabbie received the offending phone call that pushed him over the edge. As he seemed to be having enough trouble focusing on driving, I decided it was probably an inopportune moment to try out my new Family Law mad skillz.

We had dinner at Bella Italia, allowing Kirsten finally to introduce me to their infamous cheesecake. Were I to indulge in cheesecake reviews here — which I do not — this would result in a strange body-base dichotomy. The body of cake is indeed one of the finest I have tasted, crumbling as it is pierced by the fork and yet holding together just long enough to reach your mouth, melting on your tongue. And yet the base is the sort of soggy afterthought that could almost (but not quite) undermine the entire experience.

Finally, Shamini informs us that a Google image search of “2 nuns and a cow” will provide amusement — well, if Apocalypse: The Musical means anything to you, that is. If not, you’re probably rather confused about now.