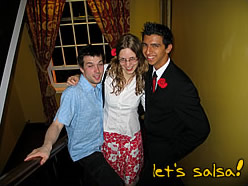 Last Monday was Catherine’s birthday and since it coincided with the special salsa-themed formal hall, we used that to celebrate it. The day was filled with a constant stream of “dück”-themed cards and presents (beginning with a post-it note on her door), based on the northern girl’s complete inability to pronounce the word correctly. From me she got a colourful kids’ book, Little Quack, with every occurance of “duck” modified with umlauts. After a decent meal, the party room was opened for salsa-ing with some of the top uni dancers. Not exactly my thing, as you might have guessed…

Instead I was joining in the antics in K Kitchen where Dave and Angie were preparing Cat’s birthday treat since the expected cake had not been bought. They had chosen to melt some of the leftover Keggs to create a set of “top hats”, chocolate and marshmallow treats that are commonly made by 7-year-olds. And yet somehow they managed to screw it up in hilariously disastrous fashion. And Since I had my camera with me, it was all fully documented. Their proudest moment was in defying the laws of physics by making the chocolate drier and harder when adding water to the melting mixture. I was warned on pain of something very painful not to let anyone see the footage until after everyone had eaten them. Which caused much amusement and a few groans at the chocolatey disaster.

“They were interesting…by interesting I mean difficult…by difficult I mean embarassing.”
– Dave on making Top Hats

Catherine, of course, loved them. Bright, colourful and sugary, what more could she possibly ask for?