Kirsten finally met my family properly yesterday. It all went very smoothly as we chatted over a leisurely luncheon at The Varsity. It’s the ideal sort of place for students to “take” their parents. Great Greek food with a price tag just outside the student budget, but not so unrealistic as to make parents feel they’re being used. The lamb remains as delightful as ever (apparently I was “boring” by choosing the fantastic Bydakia for a second time, although I’d love to try their Kleftiko which is sadly only available in the evening). I also defied further accusations of a bland palette when opting for the rhubarb crumble tart for dessert. As it happens the scandalous imputation was withdrawn upon tasting the dish which, I am reliably informed by the owner, may undergo a transformation in the near future — serving slices of a larger tart, rather than small individual portions, which will allow much deeper filling at the expense of rigid shape, resulting in a more rustic (read: messy) appearance. You heard it here first — now who says I don’t bring you breaking news? 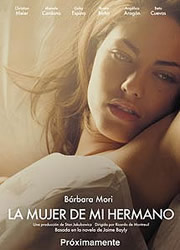 Allow me to draw your attention to new high definition trailers for A Scanner Darkly and La Mujer de mi Hermano (“My Brother’s Wife”). Meanwhile I intend to see V For Vendetta very shortly, so if you’ll be in the Croydon area let me know.

Good news, everyone! Forum rumours indicate that Futurama may be back on our screens before long. Although I found it inferior to (and less insightful than) the likes of its predecessor The Simpsons and contemporaries like Family Guy, others (like Tom G) disagree. It’s certainly fun and I’ll be happy to have a new dose available should I so choose. The contract is said to be for 26 new episodes to go into production, one imagines based on viewing figures of Cartoon Network reruns. It’s continuation depends, no doubt, upon its reception.

UPDATE: It now appears Billy West (the voice of Fry) got it wrong in the post he made. Futurama will be going the way of Firefly rather than experiencing a proper Family Guy-style resurrection, so there are a handful of movies being planned but no new series. Chances are these will be straight-to-DVD, I would imagine.

Teh Master of teh Thing

I Still Love Bees Do You?