This won’t make much sense if you don’t know who the unpleasant lawyer Jack Thompson is, and that he has a launched a personal vendetta against game developer Rockstar and in particular their most recent release “Bully”. Set in a school, Thompson argues that it promotes bullying despite the fact much of the game is spent preventing other kids from being bullied and cleaning up the school. Beyond that, attempting to explain satire to Jack is probably a lost cause. The man currently faces contempt proceedings for his outburst a judge following a ruling that allowed the release of Bully to continue as scheduled. 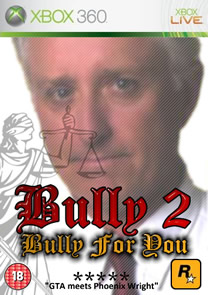 I’m waiting for Rockstar to go ahead and make the sequel Bully 2: Bully For You in which you play a newly qualified lawyer who must make a name for himself by taking on groundless crackpot causes and using bullying techniques and scare tactics to unsettle the opposition and win cases. Progressing through the game you gradually become more of a nutjob, filing continually more outrageous lawsuits until eventually the entire world hates you and you win. Or lose. Whatever.

A Collector’s edition Nintendo Wii release comes with specially designed breath sensor attachment which detects how much hot air you produce for the most realistic arrogant bastard experience yet. Finally Jack can have a Rockstar game he’ll love…

Madonna’s high profile adoption of African orphan David Banda last week was a subject which strikes home to me since friends of our family recently went through the emotional and protracted procedure of adopting a child from Sri Lanka. Perhaps the most interesting thing about this case is the new definition of “orphan” which apparently means someone with a father. This not-so-hilarious series of misunderstandings becomes even less funny now that the boy’s father has allegedly claimed he did not understand the meaning of “adoption” and would never have knowingly given away all rights to his son. If only pop stars and undead fathers were literate, things would be so much easier.

Empire Strikes Back, Return of the Fox