Best Picture That Nobody Saw 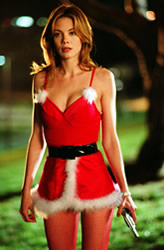 I’ve been looking over last year’s film releases while eBaying. Now you probably noticed that I didn’t put together a “best films of 2005” list because to me it seems like a largely pointless affair. How does one properly compare Match Point and King Kong? But having just rewatched it on DVD, I feel confident that last year’s Best Picture That Nobody Saw was certainly Kiss Kiss Bang Bang which I’ve raved about before. It’s a real pity given the classy Hollywood polish they achieved with just $15 million (which was actually $5 mil over budget). The WB had not been “confident in the premise” (based in part on the book Bodies Are Where You Find Them, which I’m now curious to read) but after seeing it screened they loved it and gave it a high profile release. In short, if you are one of the vast majority who haven’t seen this film, do so now.

The Gallery has been remoulded to fit the site once more. Due to some changes to the core code it’s not quite how I’d like it just yet, but it’s pretty close to the old version with which you are familiar. On the subject of photos, I dropped in at morgueFile after receiving an email about someone using one of my photographs to illustrate an anthology called Writing Through Cancer. Since I haven’t been there for a while I was pleasantly surprised to discover that my total downloads has now crossed the 2000 mark.

On to the Google Analytics-inspired geo locational visits competition (I think that’s a world first!). So far Milton Keynes is actually way out in the lead, but I don’t know who claims that traffic. Next up are Cambridge, Nottingham and Colchester, with Harrow-on-the-Hill and Kingston-upon-Hull close behind. Remember there are no prizes as yet and randomly refreshing pages makes no difference, we’re only counting visits. While we’re discussing stats, would anyone like to shed some light on who performed a search query consisting of luke church, Cambridge, and saint. I’m just curious.