Best and Worst Tickets in the House 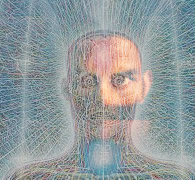 More than making up for the fact she’s not around when I finish my exams, Kirsten has bought me a ticket to see Tool at the Hammersmith Apollo on June 14th, a live experience for which I have been waiting more than four years. The band’s Lateralus tour coincided with exams so I was unable to see them (Gorchin went anyway and bagged one of Danny Carey’s drumsticks!). Maynard then moved back to his second band, A Perfect Circle, resulting in no further opportunity to see them until this 10,000 Days tour. It would sound remarkably shallow of me to tell her that I love her more than ever now, but it’s true anyway. Joining a Tool forum to read about their other gigs and to see if I could meet up with some other fans before the gig, I ended up designing a new avatar based on Alex Grey’s COSM work, which combines his psychic and spiritual systems with a real human face.

The new Da Vinci Code film seems to be everything its detractors could have hoped for. Despite the high-profile contentious source material and A-list actors, Ron Howard has somehow managed to put together a bizarrely luke-warm thriller that’s unlikely to impress anyone, whether they have read the book or not. Audiences laughed at unintentionally comic lines like “I have to get to a library — fast!” which hardly aids in mounting tension. Apparently the only thing it has served well as is an Opus Dei recruitment video, as interest in the society has exploded ever since the controversy arose. Also for those who plan their winter wardrobe well in advance, this year the albino monk assassin look is sure to be in fashion. You heard it here first.

And who would have guessed that this year’s Eurovision winners would be a Finnish zombie rock outfit. Actually, quite a lot of people, I guess.