Barenaked for the Holidays

Having recovered from my strangely oversentimental reaction to the discovery of Sonique’s disappearance last time, I thought I’d drop by to say bye before I fly off. I’m currently unpacking from Cambridge and repacking for the States in a single swoop that one may rightly describe as fell. As I’m supposed to be leaving the house at 6am, I think it’s fair to say that I’ve given up on the mortal notion of “sleep”. 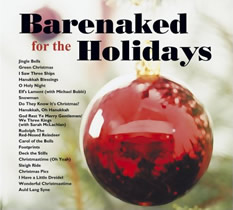 My Christmas album of choice, since I’m sure you’re wondering what might soothe the ear of this veritable Scrooge at a time like this, is the Barenaked Ladies’ yuletide offering, Barenaked for the Holidays. From it’s opening with a musically varied rendition of Jingle Bells, including a now obligatory Batman reference, it is clear that this is an album approaching the holiday with a suitably lighthearted tone and yet without making a mockery of it. The line is a narrow enough to make garotte wire envious but if anyone can manage it, my money’s on the crazy Canadian quintet.

As another treat for Halo fans it seems a dark alliance has been forged between Bungie and Team Ninja. The latter, makers of the Dead or Alive series, requested the use of Master Chief as a character for one of their games. Politely declining, since Master Chief was, to put it mildly, a little busy after events on Delta Halo, Bungie instead offered them Spartan 458, also known by alien-sounding moniker of Nicole. A full backstory was developed and you can also see screenshots of the character in action, along with more about the trans-Pacific design process. The chance to punch someone in the face with a Spartan fist sounds like the opposite of the Nintendo Power Glove (that is to say good). Or w00t-o desu as those crazy Japanese say.

It may be a little while before the next update but I shan’t wish you a Merry Christmas™ just yet, as I promise to be in touch before then. Nevertheless, enjoy the festive build-up, good luck battling through the Christmas crowds, don’t overdo it with the eggnog, and always eat mince pies in odd numbers while never, and I cannot stress this enough, in multiples of seven. The consequences could be dire.