The Visitor Map has certainly been embraced by you guys given the flood of comments we received. Most of you seem to be enjoying the new toy, largely as a procrastination tool I would imagine. The two notable exceptions are a certain disgruntled llama photographer and a sat-map electoral roll stalker. At any rate, do add yourself if you haven’t already, and then go about hunting for your father’s brother’s nephew’s cousins’s former-roommate’s old school. I’m told that’s what people are doing. I do not judge as it seems marginally more productive than dragging a piece of string around* with your mouse. 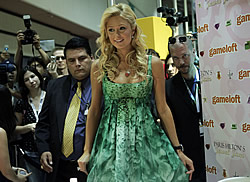 In post-E3 news, apparently Paris Hilton turned up at the convention to promote her new mobile phone game, “Diamond Quest”. Which proved to be a bit of a problem, since she doesn’t have a new game called “Diamond Quest”. It’s actually called Paris Hilton’s Jewel Jam, which you would have thought she might remember, firstly since it has her name in the title, and secondly because it was plastered all over the walls behind her. But that’s what you get for hiring Paris Hilton, I suppose. Another source suggests the game’s name was actually changed at the last minute, and she got it right. It looks like the marketing department need to be fired either way because both sound ridiculous. And Paris Hilton? 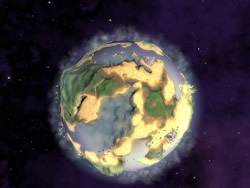 It is a little known fact that Robin Williams is an avid gamer. He was also at E3 ths year, lending his somewhat more paletable celebrity presence to SimCity-creator Will Wright’s latest brainchild, Spore, a game that looks as though it was inspired by a mixture of Pixar movies and Darwinian evolution. It certainly shows promise although it’s still hard to fathom exactly what the gameplay entails. Williams can been seen demonstrating the creature design system with suitable improvisational flair. Like Will Ferrell, the man’s comedic talents range far beyond the film roles he tends to select, as I realised the first time I saw him performing stand-up comedy, shocked to hear him swearing profusely once freed from the constraints of a U-rated set.

* WARNING: String Avoider is as insidious as it is infuriariting, we do not advise clicking on this link if you have an addictive personality and cannot be held responsible for any consequences that may ensue.