I had written a post about The Other Boleyn Girl which will have to wait because yesterday afternoon my grandmother passed away. At 91 she has been frail for several years so it was not unexpected, but it still happened very suddenly. On Friday evening she was taken into hospital with an infection. The following morning I was told she had fluid in her lungs and her heart was weakening so rushed home. Although weak she was still alert and knew that so many of her family were there with her. It was comforting to see that, while her breathing was laboured, she was in no pain. The hospital staff at Mayday were fantastic, particularly the overnight team who were very accommodating, allowing my parents to visit in the early hours and talk with her. There was no drama to her death at all — her breathing simply slowed and eventually ceased. It was a peaceful end, one she had feared she would not have. 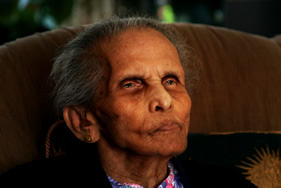 Some of you will know that my grandmother, “Ammama” as I called her, actually lived with me for most of my life. It was shortly before I left for university that she moved into a home, once it had become too dangerous for her to be left alone (her sight had completely gone and at times she would forget whether she was upstairs or downstairs). It was a difficult decision but the change of pace actually seemed to do her good for a while, grounding her mind which had been wandering. It took some time to get used to coming back to an empty house.

Born in the tumultuous north of Sri Lanka, she came to England with her children, a move which allowed me to enjoy the privileges associated with being born and raised here (indeed I owe that move my very existence since it was at university here where my parents met). Her husband died while my mother was still young so I never knew him. Her sight had faded and her hearing was worsening from the earliest memories I have of her, but it never prevented us from communicating. We invented various games based largely around her remaining sense of touch, and generally my patience with her meant I was able to mediate when my mother became frustrated (it was, of course, much easier for me since I didn’t need to take care of her the rest of the time). When home from school I would watch television with the sound turned up so that she could follow some of it. When she had her sight she had liked to watch detective dramas, particularly Colombo, so would ask me to tell her what was happening. She was cheerful, especially around her grandchildren whom she loved dearly, but increasingly in the last few years of her life she felt there was no quality left to it. She was certainly ready to die no matter how unprepared for it we may have been, so it seems almost selfish to feel so keenly upset.