I was going to write a post about the proposed new Terrorism Act that has been drafted and is receiving much colourful discussion. However, after a comment from Rob (whom I hadn’t realised is one of our readers) regarding fried chicken, I discovered he has covered the topic in far more depth than I could hope to. I urge you to follow his Law and Disorder blog immediately. 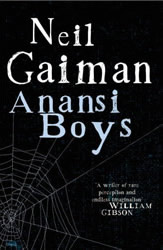 Instead I shall opt for the almost-but-not-quite-so-serious topic of Anansi Boys. I was disturbed to note that the shelves were not empty when I picked up my copy yesterday. This is a bad sign. It means there are a lot of people missing out on this latest gem of Neil Gaiman magic, a fusion of pop culture and folklore inspired by the Ghanaian trickster god Anansi the Spider (kind of “the god next door”). I’m never one for rushing out to buy an overpriced hardback as soon as it’s released but in this case I made an exception and 100 pages in I don’t regret it at all. And no, I’m not just saying that because he went to my school; I’m saying that because he’s a genius. Essentially plucking the “Mr. Nancy” strand from American Gods and flying off in a new direction, Anansi Boys feels much lighter and easier to read. Gaiman said himself that it’s not so serious a novel, but the entertaining balance is both amusing and deftly assured as he weaves a fluid folklore reality into the present day. You can read an excerpt at Neil’s official site, or listen to Lenny Henry reading the opening.

Meanwhile, in case you read yesterday’s entry early on, I have since added the second part to Cambridge Knights, which itself has a Gaiman ring to it. I’ll now wait to see what the response is like now before deciding whether to continue.