An Evening With Neil Gaiman

For some time now Neil Gaiman has been my favourite (living) writer. With this in mind it came as quite a shock to discover a few days ago that he was doing an interview/reading as part of a Stardust promotional tour, and then to discover that I now live in London so could actually go along to attend. Since Jane has just returned from the States and is as much of a fan as I (to the point that she has actually defaced her body with Sandman-themed ink), we headed along together yesterday evening to the Criterion Theatre, a much more comfortable venue than the usual in-store reading. 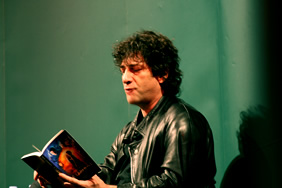 Neil is as remarkably friendly and convivial as he seems in all the interviews I have previously stumbled upon. His casual demeanour makes for a wonderful evening where you feel as if he is chatting directly with you, and not the whole avid audience of a darkened theatre. He read from the Stardust novel (though sadly not from his forthcoming The Graveyard Book) and discussed all manner of things from his writing roots to how our lives seem to be scripted by multiple authors from one moment to the next. I recently heard an anecdote attributed to him which, unprompted, he confirmed: Neil was chatting to a publisher who became very awkward upon discovering he wrote comics. When he realised who Neil actually was he relaxed saying, “Ah, but you don’t write comics. You write graphic novels.” And Neil suddenly felt like a prostitute who had just been referred to a “lady of the night”. 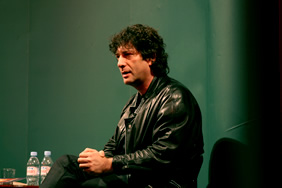 The floor was opened up for questions and without missing a beat a girl stood up and asked, “would you think it forward of me to kiss you?”, quoting directly from the Stardust passage he had just read, and leaving slightly shocked Neil unusually lost for words for a few moments. Another question revealed, after feeling stung by their adaptation of Neverwhere, Neil is now quite keen on working with the BBC again. Possibly, he suggested, on Anansi Boys (a very succinct 1-hour radio play has just been recorded for BBC World Service). He also discussed what actually happened when he and Jonathan Ross finally met Steve Ditko, the reclusive co-creator of some of Marvel’s big names like Spider-man. He had been involved with Ross’ documentary In Search of Steve Ditko but after tracking down and meeting the man alone, the pair refused to tell the cameras what actually transpired, feeling it was somehow better that way. Finally when asked who would play him in a film of his life, Neil answered unequivocally that it would have to be Dylan Moran or at least someone with his hair.

The event was far too short, followed by a signing queue that was far too long, but it was well worth the wait to get my hardback copies of Anansi Boys and and Endless Nights signed. Unfortunately towards the end of the queue they had to speed people along, so we didn’t really get to speak to Neil much at all (though Jane did partially undress to show off her tattoo, admittedly at his request and only to see her shoulder). Nevertheless it was a magical evening and one that I hope to repeat soon. After all, he’ll have to promote Beowulf before long…

Aurea: There Is Only One Sun