“All The Cool Heroes Are Taken…”

To elaboroate on yesterday’s post for those who didn’t get it: I expect the Ghost Rider experience to be akin to paying a cinema for the sort of detritus usually found between one’s teeth (assuming, of course, that your last meal was gristle and not gourmet steak). I could be wrong, however, and therefore elected to provide you with the link in order that you might inform yourselves to make your own decision. I imagine there is something of a frenzy amongst the Hollywood elite, all keen to add a comicbook hero to their list of credentials but increasingly worried as all the cool ones get snapped up. It’s like an elaborate game of Mutant Musical Chairs where the loser is doomed forever to play roles in period dramas and chick flicks. 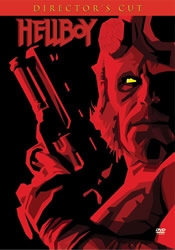 You may have heard that a Halo movie is in the works, pencilled in for a 2007 release. A scary prospect for every fan of the game, to be sure, but I’ll admit my fears were quelled somewhat after last month’s announcement of the producer, a certain Mr. Peter Jackson. If this means Weta are on board to bring Master Chief and the Covies to life then I’m all for it. It’s still a daunting project but the budget’s certainly available and with some judicious casting it really could work. Directing rumours included one of my personal favourites, Guillermo del Toro. He confirmed that he had been approached but stated he was unsure if he would be free as a possible Hellboy sequel was a higher priority for him. While this may sound astoundingly sacriligious to Bungie fanatics, it does make sense. Hellboy showed that he (and Ron Perlman) had an innate understanding and affinity for Big Red. It would be a shame to see the franchise pass into the hands of a less competent director for a standard cash-in sequel.

You’ve probably guessed that I’m a little pro-Hellboy. In fact the only reason it’s not in my DVD collection is that the director’s cut adds about 10 minutes of decent scenes that flesh out the side characters, but the UK release was delayed by almost a year after the Region 1. It is finally surfacing on the 9th, so go grab yourself a copy!